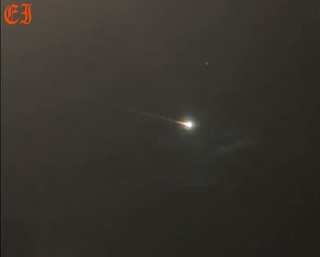 Initially there was speculation that the celestial body was not a meteor, but rather part of a man-made machine (space junk), or related to the satellite of Elon Musk. However, the UK Meteor Network has given confirmation that the object is indeed a meteor.

Can't believe I seen this and managed to catch it on camera!! Going over Paisley at 10pm☄️ #glasgow #paisley #meteor #comet #fireball @UKMeteorNetwork @Daily_Record pic.twitter.com/mH9o2062nI

The UK Meteor Network explained that it was likely that the meteor fell into the North Atlantic Ocean, about 50-100 kilometres west of the Isle of Islay.

The UK Fireball Alliance stated something similar on Twitter. The visible fireball was indeed a meteor and most likely fell in the ocean. The fall position was predicted between north londonderry and west of Islay.

This phenomenon of falling meteors is quite interesting because it happens that a leader has just died in Scotland, namely Queen Elizabeth II. He died at Balmoral Castle and his remains were briefly taken to the Scottish capital for burial, before being taken to London.